If you’re reading this, it’s likely because you are as fascinated as we are by the quite frankly insane world of dinosaur erotica.

We’ve already compiled a detailed introduction to the sub-genre that will help get you up to speed with the scaly, sexy goings on of this monster erotica sub-genre.

Now, we’re going one step further and giving you some of our favourite excerpts and book titles (with pictures, of course). Enjoy!

Synopsis: Jeremy was never quite sure about his feelings for Oliver, his gay pet dinosaur, until Oliver scores big and leaves home to pursue his dreams of being a dancer.

Years later, the two of them reconnect for dinner in New York City, and realize that there may have been more to their relationship besides prehistoric pet and master. Now a wealthy socialite, Oliver the triceratops is willing to take another chance on Jeremy, and soon the two find themselves locked in a passionate evening of gay human-dino love.

“The dim, romantic lighting is enough to make anyone look sexy, but Oliver has clearly aged beautifully. He was always a good-looking dinosaur, but the specks of grey that now dot his scales have added an air of self-assured beastliness. Oliver’s also dressed way been (sic) than he ever did when he was my pet, the cutthroat world of male burlesque doing a complete one-eighty on his previously tired fashion sense.”

Synopsis: Drin is her tribe’s chief huntress; she lives for the thrill of the hunt. Men and sex hold no allure for her, as Drin has never found a partner to satisfy her. When a T-Rex descends upon her village, destroying it, Drin demands that the tribe’s hunters go in search of the beast and slaughter it. Opting for safety instead of revenge, the tribe moves to a new location, hoping that the big beast won’t follow them.

Drin taunts the beast, giving her tribes mates time to flee. As she runs, leading it through a gauntlet of traps, the thrill of the hunt soars through her blood, leaving her wet with desire. When the angry T-Rex corners the huntress in a box canyon, it seems more interested in her wet womanhood than in her flesh.

“She caught the girth of its fat cock in her hands and drew it towards her body, increasing the area of nerve endings which were being stimulated. The T-Rex seemed to appreciate the gesture […] it seemed as if time stood still. There was nothing in the entire world apart from this grunting, grinding, growling lizard and Drin, wrapped around its cock. She managed to bring her legs up, locking her ankles around its wet dick as well, the entire length of her body becoming a cunt for this animal to fuck.”

Synopsis: Beliria’s pride has gotten her into trouble again.

Before she can complete her rites of womanhood and take her place in the tribe, she must provide a kill for her tribe. Beliria chooses to hunt the most dangerous herbivore on the plains, the Tri-Horn. No single hunter has ever successfully taken a Triceratops, but Beliria is determined to be the first. Naked, with no food, water, or provisions beyond her weapons, Beliria sets out. Tracking the Tri-Horn, she lays a cunning ambush, but it isn’t cunning enough.

Her attack caused the big bull Triceratops to lose his mate. Now he intends to replace her- with Beliria!

Horrified and aroused by the horned giant, Beliria must find a way to control the situation, or she may find that this Tri-Horn is really too much for her to handle.

“It may have been the best sex I’d ever had, but I didn’t want to do it again.” 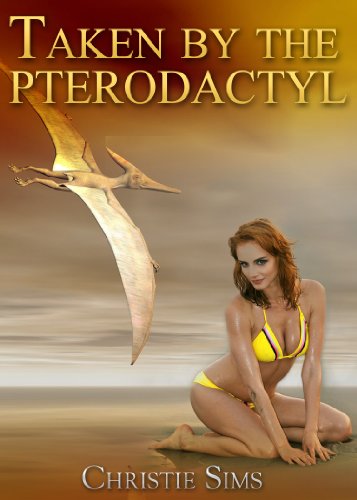 Synopsis: Dianne is a shepherd, watching over flock of sheep. She is sworn to protect them against any predators– no matter the size. But when a flock of pterodactyls attack, Dianne has no choice but to use herself as bait to draw their attention away from her precious flock. One pterodactyl swoops in and picks her up, taking her to his nest. She fully expects to be eaten by the massive beast, but when it starts to peck her clothes away, leaving her naked, she begins to understand that the pterodactyl might have carnal pleasures in mind. Dianne finds herself excited by the prospect and acquiesces. But can Dianne accommodate such a massive creature?

“Don’t be so stupid,” she scolded herself. “What, are you going to live up a tree your whole life, getting fucked by a dinosaur?”

“She let out a heavy sigh; the idea was appealing, it just wasn’t practical.” 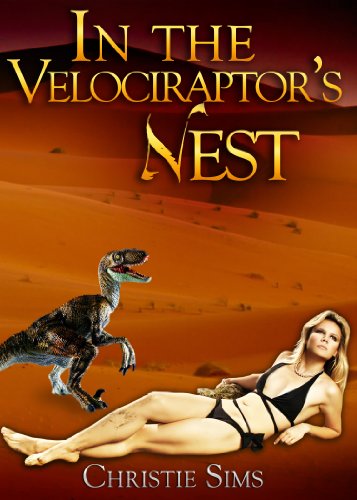 Synopsis: Azog is an underappreciated cavewoman in her tribe. The cavemen treat her like a piece a meat. They disrespect her at every turn and never listen to anything she says. Azog cannot change this unless she proves herself as a hunter. When she goes out in search of fresh meat, she discovers a clutch of baby velociraptors and decides to kill them and triumphantly bring them back to her tribe. That is, until their father shows up and blocks Azog’s way out of the cave. Azog must use all of her womanly wiles to get out of the cave, which includes doing things she had never dreamed of.

“The raptor quickly slashed away the rest of her hide, watching with wide black eyes as the leather fell at her feet. It seemed to take its time, sniffing at her young hot body. Azog quivered with fear and desire. The cave was hot, and now sweat began to gather at her throat and glisten across her supple skin. She could feel every bead of sweat as it caressed her naked body, feel the raptor’s gaze upon her human flesh. Azog suddenly understood what she would have to do to survive. She offered her body, naked and yielding, sweaty and raw, moist hot and wet, as a sacrifice to the beast. Perhaps if she pleased it, she would be allowed to live. If not, she would leave this world as she entered it, naked and screaming.”

Synopsis: The year is 2014 and dinosaurs have gained control of the world economy due to exceptionally accurate stock predictions. After graduating from NYU with a business degree, John is hired to be the assistant for one of the largest trading firms on Wall Street. His boss, the CEO of the company is highly regarded as the best businessman of the century. Only difference is that he is a dinosaur!

“My father had never liked the dinosaurs ever since they began taking control of the world economy. When I was growing up he tried to condition me to hate them, too. I never did though. I thought that they had just as many rights as we did. They shouldn’t be punished because they had extremely accurate stock predictions in the eighties, becoming the single leading force of Wall Street presently. I was more grateful that Mr. Anderson (a dinosaur) was going to take a chance on me and let me be his assistant.

‘Yes Dad, he’s the dinosaur billionaire. He’s also my boss now so please don’t lecture me on them again.’”

Synopsis: Space can be a lonely place, especially when you’re stationed by yourself on the distant planet Zorbus. In fact, Lance isn’t quite sure that can last the whole year before his shuttle pod arrives, but when a mysterious visitor appears at Lance’s terraforming station, he quickly realizes that he might not be so alone after all.

Soon enough, Lance becomes close with this mysterious new astronaut, a velociraptor. Together, they form an unlikely duo, which quickly begins to cross the boundaries of friendship into something much, much more sensual.

“I kiss Orion deeply, one last time. “Are you sure you don’t want to come in with me?” I ask.

“I don’t think it’s going to help your case,” the raptor replies. “I mean, some people just don’t understand that love is real. You’ve gotta put yourself in there (sic) position. They’re so used to everything working a certain way, women kissing men, men kissing men… not men kissing dinosaurs.”

Synopsis: Marga was the Protectress, the city’s leader, charged with defending it against dinosaur attacks. It is her sworn duty to protect her city at all costs, even when a pack of velociraptors attack her and her men at a small, undermanned outpost outside of the city.

The battle is a vicious one, and after a daring maneuver to save a fellow soldier, she finds herself trapped by the pack leader, a powerful male. The creature captures the Protectress and takes her to his cave. Will this raptor make the Protectress his next meal? Or does the beast have different plans for the beautiful warrioress?

“Marga looked down, and noticed the heavy green pouch hanging between the raptor’s legs… Her mouth gaped when she saw a pink mass emerge from it. Suddenly, the raptor began to move his hips towards her, punching the air with his swollen member that glistened in the light of the cave. In that instant, Marga understood, though the reality was hard to grasp… The thought disgusted and terrified her.” 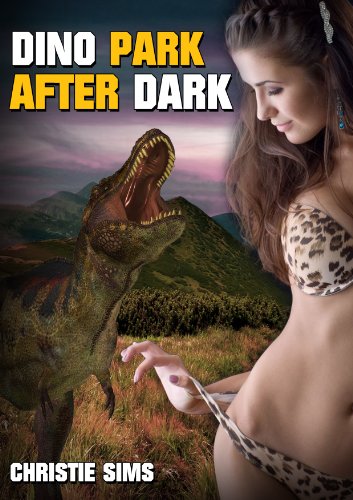 Synopsis: Dino Park houses the New Dinosaurs- beasts created by scientists from residual DNA. The park is open to the public, who come to see the big carnivores and the classic, well-known herbivores. Smaller, gentler dinosaurs perform for the public.

Maria trains the marine reptiles- she’s been working with the same plesiosaur for more than three years. He’s friendly, well trained, and greedy. One night, Maria stays late to feed her plesiosaurus and disaster strikes- she tumbles into his pool.

The plesiosaur isn’t just greedy, he’s hungry. The only one of his kind, he’s been lonely and amorous for years. But now Maria, the human he’s imprinted on, is in his element and he’s got a lot of pent-up frustration to work out.

“Maria thought that perhaps the creature was going to lift her from the water and save her, she felt a bump from behind. Holding the platform with both hands, she kicked and kicked until her pants, along with her panties, slipped down her legs and joined her shoes at the bottom of the murky water. Suddenly, she felt something thick and large between her legs – a dinosaur. She couldn’t understand what she was feeling. She had no idea what it was and she didn’t have the strength to hold herself above the water while she looked. The large stiff object slid between her thighs and prodded at her vagina. Whatever it was, was thick and hard and although it had a knot on the end. A thickly rounded bell shape that pushed inside her. It was big. Bigger than any man.” 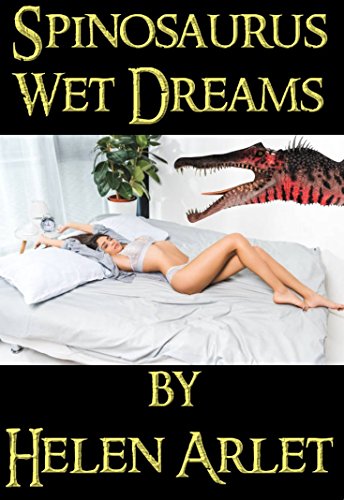 “The mud would help cover up her scent. It was nice and cool as she smeared it on, helping to ease the heat of the humid morning, and felt strangely sensual as she rubbed it all over her firm, young breasts, down her toned belly, and even between her legs. Sheila made a note that she would have to experiment with this some more at a another time when her life wasn’t in danger.”

Like what you see? Check out what others are saying about dinosaur erotica in our compilation of real-life book reviews