Long before we had smartphones, laptops and the seemingly limitless expanse of the internet, libraries were the place to go when you wanted to learn everything about anything. Yet seemingly gone are the days when libraries would be crammed full of students desperately trying to fill their minds with knowledge when exam week came about, or entrepreneurs with new business ideas would roam around the business section gathering scraps of knowledge from each book, collecting notes as they went. An aspiring pilot now doesn’t have to go out of his way and make it to the Aviation section to pore over books on the history of flight and aerospace design.

You get the point…

Despite these changing times, libraries remain a magical place. Loved by so many, they have drawn praise from artists, writers, scientists, politicians – described by astronaut Neil Armstrong as being fundamental to all human achievement. Part of their power surely lies in what they represent: infinite knowledge stacked up high on shelves, labyrinths of books, enough to overwhelm even the most diligent imagination – knowing that each and every weighty tome was produced with love, care and passion by the author. And all this accessible for free, through the awesome power of the humble library card.

The importance of libraries absolutely cannot be emphasised enough, they are after all ‘The ideal sanctuary for books’. What is more, they play a vital role for writers; and are integral to our collective cultural desire to read.

So, we’ve done you a solid.

Below, we’ve compiled a list of a few interesting and unique libraries from across the world. In no particular order, we hope they inspire you.

Located in the heart of Dublin, and the walls of it’s prestigious college, lies the Trinity College Library. A place which instils wisdom, inspires the artist and motivates the architect. Built back in 1592, the structure is not only beautiful to look at, but a true marvel of architecture. The high shelves hold roughly six million volumes, ranging from Mathematical Engineering to Geology. A vast collection of maps, manuscripts, journals and sheet music are also stored. Utterly priceless.

Designed by Ernest Gimson and Built in 1921, The building is regarded as truly one of the best Arts and Crafts building in the country and is Grade 1 listed. The vast hall, complete with small nooks and comfy cushions by the windows, high shelves covering two floors and a balcony is home to some twenty six thousand volumes, four thousand of which are said to be works of fiction. A small film was dedicated to the library, which can be found here.

Walker Library of the History of Human Imagination

Now this, dear reader, may be the most interesting thing you have seen all day. Perhaps all week. This ‘Library’ deserves an entire feature to itself, but to do so accurately, and to give this place any justice at all, one would need to travel there and see it in the flesh.

Housing not only a vast collection of somewhere in the region of 50,000 tomes, this ‘library’ is more of a museum. Tucked away in the many nooks and crannies are rare and interesting artefacts ranging from 45 million year old cat sized dinosaur fossils to a full set of glass eyes. The Russian Sputnik space probe to century old anatomical etchings. The facility is heavily inspired by invention, innovation and science with some serious Juxtaposing; An Apple II computer sat next to the first typewriter. Books bound in rubies and laced with gold are hidden away, treasures to be found only by the worthy.

The high walkways are glass bottomed. The illuminated, colour-changing glass panels are etched with scientific and astrological symbols and from the M.C Escher inspired maze like staircases right down to the ‘Tumbling Block’ Floor pattern – Again, M.C Escher – the true design of the place is breathtaking and enough to make your ‘jaw hit the floor’ like an old cartoon.

Unfortunately, the wonderfully designed building is an extension to Jay Walkers home in Ridgefield, Connecticut, and is subsequently off limits to the general public.

Not your traditional Library, this masterpiece was set up by British teacher, Mary Jones, who lovingly dubbed it ‘Jungle Books’.

Ms Jones began taking books up to the library a few years back, but decided she could and would do better.

Turns out, she did just that.

Since it began, she hasn’t only managed to stockpile hundreds of books, but also board games, generators and a 4G internet router. A router isn’t useful without a device to search the web – so, by popular demand, Ms Jones also managed to source a few laptops. This way, the frequent visitors to the library, which is housed in a makeshift shed, can do online research, use translations tools and even Skype loved ones. She listened to what the people of The Jungle required and delivered; making a real difference.

Ms Jones has said the library isn’t just a place for books; but a place for people. Where people with nothing can go to learn and to read. To interact and inspire themselves. It’s a place which will make life slightly more bearable for refugees fleeing their homes and countries from the devastating effects of war. Though the library is being overwhelmed with donations of books, there is emphasis on books in the native language of the refugees.

Unfortunately, recent events drove the occupants of The Jungle to set fires to their camp in an attempt to stop demolition experts from levelling the shanty town. According to Ms Jones, the fires,fed by the blowing winds, came dangerously close to the Library. She also stated that she didn’t mind taking it down if the frequent users of the library moved on and found asylum. It has served it’s purpose and she seems happy. If and when Jungle Books gets destroyed, she hopes another will be set up.

A true beauty, and a seemingly rare jewel hidden away in the deepest darkest depths of Prague. The Klementinum Library was opened in 1772 as the place of learning and knowledge for the Jesuit University. Jesuit being ‘Society of Jesus’. They founded schools and universities, colleges and places of research – cultural pursuits.

The fantastic and beautiful looking building  houses close to twenty thousand books. Some of the rarer scripts in the native Czech language have been carefully removed and taken to to be scanned, so as to be made available to us all at a laptop near you.

The ceiling was painted by the artist Jan Hiebl, and with an astonishing level of detail, appears at first glance to be vaulted with a windowed roof. This is all a clever illusion to create the appearance of space and light; but, from the right angle, even the most diligent observer might be fooled for just a second. The beautiful varnished and spiraling shelves house a number of interesting and knowledgeable reads. A balcony on two levels overlooks the main hall, lined with ornate globes and gold leaf pillars.

This place is truly a beauty, and if you’re ever in Prague – Czech it out!

The library of the future 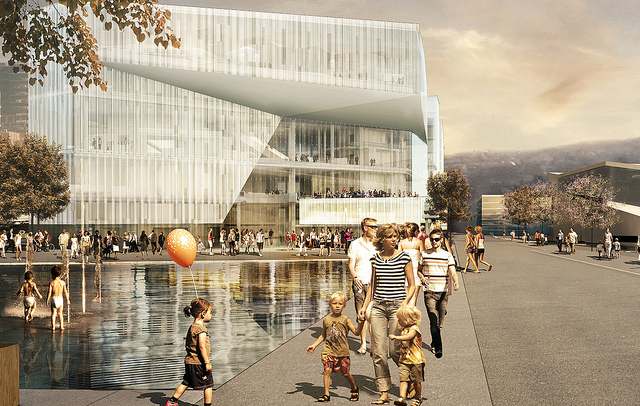 We’ve seen some of the magnificent places in which treasure troves of knowledge, culture and literature are housed. But where will our books be housed for future generations? In Norway, The Future Library has been set up as a 100 year project by Scottish artist Katie Paterson.

From 2014 until 2114, one writer every year will contribute a text, with the writings held in trust, unpublished for up to 100 years. Each writer has the same remit: to conceive and produce a work in the hopes of finding a receptive reader in an unknown future.

The manuscripts will be held in trust in a specially designed room in the New Deichmanske Public Library opening in 2019 in Bjørvika, Oslo. Intended to be a space of contemplation, this room – designed by the artist – will be lined with wood from the forest. The authors’ names and titles of their works will be on display, but none of the manuscripts will be available for reading – until their publication in one century’s time. The library room design is in collaboration with Lund Hagem Architects and Atelier Oslo.

If you’ve been inspired by some of these incredible buildings, why not head over to your local library. You could use it to finally read those books you haven’t read (even if you say you have) or maybe some delightfully odd poems about carrots. Whatever you do, make sure you sign up for our newsletter – a free, regular digest of everything interesting.

Ben Garland is an aspiring writer of novels, short stories and, when he feels particularly inspired, the occasional screenplay. Based in the UK, he’s inspired by the written word on page and on screen. A blogger and news writer for Nothing In The Rulebook, Ben can be found most days and nights by his typewriter. He Tweets at @BenGarland8