Will the revolution be digitised? For the past several years, this has been the question increasingly being asked by those in the publishing industry looking to break with the old, frustratingly risk-averse models that so often – as Julian Barnes once noted – only seem to be interested in publishing “copies of novels that are copies of previously successful novels.”

As the online world becomes ever more a part of the real one, the pressures on writers and publishers has only increased. With the incomes of writers continuing to collapse, and independent publishers struggling to compete with the corporate behemoths, many aspiring writers and publishers are reaching out directly to readers before their books are published (or even written, in some cases) through crowdfunding websites such as Kickstarter.

The crowdfunding model is now even being adopted by the publishers themselves. UK publishing house Unbound made waves when they were founded in 2011; and truly announced their arrival as publishing heavyweights in 2014 when one of their novels was longlisted for the prodigious Man Booker Prize.

With Unbound, the company takes crowdfunding beyond the singular focus of financing a project like Kickstarter – as The Independent Publishing magazine explains: “Unbound is a publisher that happens to use a funding platform, rather than a crowdfunding platform suitable for book publishing. It’s an important distinction and visitors to the Unbound website will appreciate that the company is driven by the publication and sales of books. It is refreshingly transparent about its method of business.

Found in the crowd

So, why the move towards crowdfunding? Well, as the author Dan Coxon has noted, part of the reason is that this model provides both writers and publishers with confidence. Coxon says it is “useful to think of the new crowdfunding model as a kind of inverse marketing: whereas the publicity campaign usually kicks in upon publication, here we did all our marketing in advance. I like to think that most of these people would have bought the book anyway – but by doing it ahead of publication, they helped reduce the risk to both publisher and authors, and therefore made the book possible.”

Coxon knows what he is talking about here – having successfully crowdfunded two anthologies on Kickstarter: Being Dad: Short Stories About Fatherhood (Tangent Books), and most recently This Dreaming Isle (Unsung Stories). But for every book that does reach its crowdfunding target, there are two more that fail to do so and never see the light of day.

10 (plus one) of the best literary crowdfunding projects

So, in the hope of honouring our ambition to support creatives of all stripes to fulfil their artistic ambitions – while also introducing readers to new and unique books, we’ve put together the following list of literary crowdfunding projects that we’d recommend you all supporting. And remember, there aren’t just books on offer here, but often wonderful rewards that you can pick up as well.

P.s. If you or someone you know has a crowdfunding project that you’d like to see here in this list, contact us and let us know – we’ll be updating the list over time as projects successfully fund and new ones launch, so it’s always fresh.

Is it possible to be a good dog? Do we catch balls of our own volition? Or are our decisions to eat the rotten apples, to bark at the cat, predetermined? What is it to know that you have behaved well rather than merely believe it?

All these questions – and more – are answered in Philosophers’ Dogs: a ground-breaking book, featuring beautiful illustrations, it promises to shake the very foundations of both western and eastern philosophy.

Support the campaign now – and pick up rewards including the opportunity to name a dog in the book, pick up beautiful original art prints, as well as even receive a personalised illustration of your own dog as a philosopher.

Also – considering one of the creators of this book is a member of our own creative collective, how could you not support this project? We’re a collective, after all.

2. The Advanced Rhyming Dictionary for Rappers and Poets

This book is a necessity for writers everywhere. Traditional rhyming dictionaries are becoming outmoded as we see rappers and poets turn to multi-syllabic slant rhymes rather than the mono-syllabic perfect rhyming suggestions of ‘cat/mat/Monserrat’. Rhyme is rarely so precise anymore. It has evolved. And with that evolution our tools, too, need to evolve.

With traditional rhyming dictionaries ill-equipped to cater to modern writers, this book, from battle rapper Adam ‘Shuffle-T’ Wollard, there are so many applications for this book and so many ways in which it can help people’s creativity.

Get rhyming (and battle rapping, if you so wish) now – all through pledging for one of the fabulous rewards on offer.

Atari: synonymous with some of the best-known early arcade hits such as Pong, Asteroids and Centipede, and to this day a favourite of those who understand the groundbreaking impact it had on the home computer and video games industries.

But this book isn’t just a sweet nostalgia trip (though it promises to be that, too). It is, more obviously, a beautiful, one-of-a-kind compendium book for your coffee tables about the Atari 8-bit home computer and its third party software titles from the 1980’s and beyond. 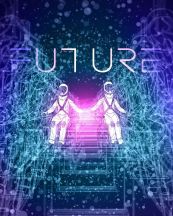 A full-colour science fiction graphic novel about love, hope and the end of the Earth.

Featuring stunning illustrations from award-winning artist Rupert Smissen, Future posits that it’s during the worst times that we most need to move forward, to push through hopelessness and shape our future rather than letting it shape us.

What’s more, you can sneak a preview of this fabulous book by reading the first chapter online. 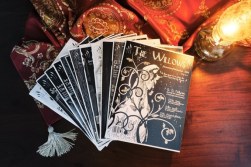 We love a good creative endeavour put together by a collective of likeminded creatives, so perhaps no surprise to find this one in the list. ‘The Willows’ is the beautiful hand-crafted magazine put together by a group of artistic and literary misfits. This project aims to bring all past issues together into one beautiful anthology edition.

Featuring a wealth of classic stories from G. D. Falksen, Sarah Monette, Lawrence Dagstine, and many more — along with brand-new tales from award winners Gemma Files, John Langan, Brian Evenson, Orrin Grey and Jesse Bullington; plus a new introduction from editor Ben Thomas — this anthology will be a collector’s item you’ll be proud to treasure.

6. Nothing But A Good Time

This one is right on the cusp of reaching 100% funding. This book will provide readers with a fascinating cultural history of Glam Metal: where it came from, how it defined America in the 1980s and how it all came crashing down.

The book is written by Justin Quirk, an award-winning writer, editor and broadcaster from London who has written for The Guardian’s, Kerrang! Arena and Esquire as well as the Times, Sunday Times and The Independent.

We have nothing but good things to say about this book – help make it a reality.

This book is the culmination of a huge undertaking. Between 6 February and 16 May 2018, 100 Voices crowd-sourced stories from female-identifying writers all over the UK. Award-winning novelists, theatre makers, short-story writers, bloggers and poets each contributed a short piece responding to the theme ‘something I have achieved’ on the 100 Voices For 100 Yearspodcast. The resulting collection, transcribed in this stunning book, is a treasure trove of thoughts on what it is like to be a woman in 2018.

8. Wonders and Visions: A Visual History of Science Fiction 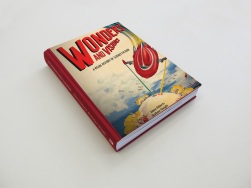 This sumptuous book tells the story of science fiction through its most iconic, beautiful, interesting and (sometimes) crass cover art: from the earliest days of publishing in the 19th-century, through the glory days of Pulp magazine covers and the Golden Age, into the endless visual experimentation of the New Wave and so to the post-Star Wars era, when a ‘visual logic’ comes to dominate not just science fiction but culture as a whole.

With over 350 full-colour images and more than 50,000 words of text this is more than simply an anthology of famous science fiction covers–it is an ambitious attempt to tell the whole history of the genre in a new way, and to make the case that science fiction art, from the sober future-visions of Chesley Bonestell, to the garish splendours of Hannes Bok, from the Magritte-like surrealism of Richard Powers, Frank Freas, Judith Clute, and Ed Emshwiller to the amazingly talented designers and artists of the 21st-century, exists as a vital and neglected mode of modern art as such. 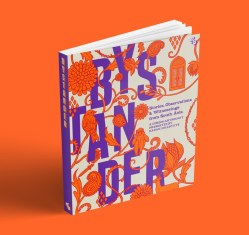 The BYSTANDER anthology is comprised of both a print and a web component. The print output will be a beautiful and stunning book offered alongside a variety of rewards like delicious zines, posters, postcards, stickers… which are all up for grabs!

Quiet Pine Trees is jet fuel for your imagination and a wrecking ball against writer’s block. This collection features more than 500 tiny, strange stories from my years-long campaign to turn the humble tweet into a self-contained work of literary art. The limited format forces each story to combine powerful imagery with haunting themes in just a few words, creating snapshots of bigger, stranger worlds to inspire the creativity of the reader.

These micro stories cover a wide range of genres, from science fiction about advanced time travel techniques, to otherworldly fantasy about desperate trees and artillery pianos, to cosmic horror about why dolls can close their eyes.

11. Poetry to the People: A Book Truck Tour

Okay, so technically not a single book, but we’re a collective and all about any project that aims to bring lots of literary delights to lots of people, so we’re big fans.

House of SpeakEasy, an inventive NYC-based literary arts nonprofit, has a 27-foot-long box truck retrofitted with open-air bookshelves with enough room to haul thousands of books. Narrative 4, a global story-exchange organization, has a summit in New Orleans. What happens when you put these two together along with dozens of community partners along the way? A 10-day, 10-stop tour: Poetry to the People.

Go on and get involved. You know you want to.