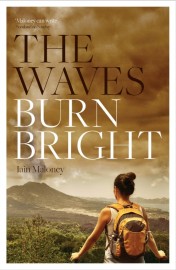 There should be a critical term for a book that you can’t stop reading; but also makes you stop and think. One that is both page-turner and intellectually stimulating, politically active and engaging. Reading The Waves Burn Bright – the latest novel by Scottish author Iain Maloney – takes you on one of those rare, utterly enjoyable literary experiences where you find yourself disappointed to have to close its pages (to change trains on the commute to work; or because it’s three in the morning and you’ve been reading avidly on your sofa having come in late from a day in the office/football practice/drinks/boozy dinner – delete as appropriate – and you realise there is a real chance you might not sleep at all if you don’t force the pages of this book closed).

Even with its pages closed, it is a book that stays with you. You will find yourself musing on its action, pondering the motives of the characters, and re-imagining the events described in the hours between reading. Indeed, there are certain passages that are so vividly described, so moving and intense, that they will remain with you long after you have come to the end of the book. For instance, as we follow the principle protagonist of the novel, Carrie Fraser, experience the traumatic evening of July 6th 1988 – the night of the Piper Alpha oil disaster, in the terror-gripped hospital waiting room, the emotional impact is frighteningly real.

It is, of course, nigh impossible to truly imagine the feelings of the families that were forced to wait in those sterile hospital walls waiting for news from the oil rig that night; nor of the men aboard the Piper Alpha itself. A disaster of such scales is rarely possible to contemplate; but less to write about effectively. As Kurt Vonnegut notes in Slaughterhouse 5, there can sometimes be an expectation that it is easy to write about these types of events (in Vonnegut’s case, the destruction of Dresden), because “you only have to write about what you saw”. Of course, the reality is quite the opposite, and so it is a sign of Maloney’s considerable writing skill that he is able to not only recreate and describe the night on the oil rig (brought to life through the eyes of Carrie’s father, Marcus), but also able to capture the raw emotional impact that the Piper Alpha disaster had – not just for the men and their families immediately involved, but also of the wider Aberdeen community.

This manifests itself – at times – as righteous anger in the writing. The bitterness, for instance, carried in Marcus’s remarks as he recalls: “nobody cared about safety standards” – or the revelations Carrie discovers for herself: “decisions about safety, budgets, cuts, were made onshore by people who would never be put in danger.” This, of course, is the natural reaction to events that expose – ultimately – the failures of the modern neoliberal capitalist model, where profits are placed above people, and regulations stripped away. Here, The Waves Burn Bright places the blame for the disaster squarely and quite fairly at the door of the oil industry – but without the need to create moustache-twiddling villains of the oil company executives themselves.

Of course, this is not just a book about the Piper Alpha disaster – thematically and narratively, The Waves Burn Bright touches upon numerous different elements and dimensions. Carrie’s world-traveller life post university, Marcus’s alcoholism, gender roles and sexuality, questions of reality, of how we derive meaning from life. Are adventures good for us or do they just wreck our lives? Does travelling the world make you a cultured adventurer, or just a way of avoiding coming home, of addressing feelings we rather would avoid or ignore?

These are questions that are not necessarily met with answers in the book. This is a relief, for there is often a tendency in modern writing to lay it all out there for the reader – as though we wouldn’t be able to bring our ideas to the table otherwise (which ultimately is surely against the very nature of literature, reading and writing). Indeed, Maloney’s real strengths as a writer is that he doesn’t fill in just for the sake of it. There is a Hemingway-esque brevity to many of his sentences; particularly in the passages describing the night of the Piper Alpha disaster itself, as well as in other pivotal narrative moments, such as during Carrie’s visit to the Sakurajima volcano in Japan. This style ensures it is the reader who fills in the gaps – and our mind runs along the same thought patterns of Maloney’s protagonists. This creates a liberating sense of openness and inclusivity – which is surely a key reason why reading The Waves Burn Bright is such a pleasure.