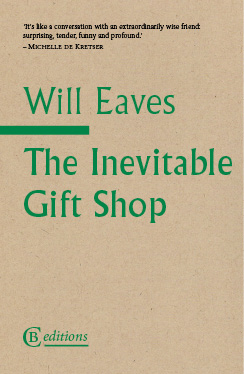 An artistic movement is forming. One that is open to spontaneity, artistic risk, emotional urgency and one which flies against traditional models. Will Eaves’s latest book, The Inevitable Gift Shop, is an example of this movement displayed in written form. We may call it a book at first mention, rather than a novel or a collection of poetry, because really this is simultaneously both of these things, and at the same time, something else and something new entirely. A combination of prose, poetry, literary critique and philosophy, it is collage, it is memoir, it is anything and everything that you want it to be. If there were rules to writing – which there aren’t (probably) – this book is rewriting them.

While mainstream publishing continues down a well-trodden but not exactly adventurous path – Julian Barnes suggests in an interview with the Paris Review there is little objective beyond “publishing copies of novels that are copies of commercially successful novels” – Eaves is cutting an entirely new path, machete in hand, through bush, briar and jungle into uncharted artistic territory.

So what does this new territory look like? In one word – episodic. In sections ranging in length from a single line to two or three pages, are contained mini-narratives and episodes, which sit alongside poems, and abstract thoughts and expressions of ideas. For instance, here runs a complete section early on in The Inevitable Gift Shop:

“The novel is the autobiography of the imagination”

Such lines make us question whether we feel we are reading a novel; an autobiography or, perhaps most intriguingly of all – an accurate representation of creative imagination.

Imagination, after all – and, indeed, so many of our thoughts and ideas – does not run in linear patterns. Rather, it comes in flashes; moments of clarity and inspiration. As Daniel Dennet notes in Consciousness Explained:

“While we tend to conceive of the operations of the mind as unified and transparent, they’re actually chaotic. There’s no invisible boss in the brain, no central meaner, no unitary self in command of our activities and utterances.”

Traditional forms of fiction, therefore, do not to justice to the reality of the human mind. Conventional fiction teaches us that life and our thoughts are coherent – they are linear and whole, neat and wrapped up. When the truth of the matter is quite the opposite; our lives, and our ideas, are fragments, and we stumble upon them as though they were bright splinters.

Eaves’s previous book – The Absent Therapist­ – worked within a similar form and structure. It brought together a succession of mini narratives, and a multitude of different characters and protagonists. In The Inevitable Gift Shop, we are again introduced to different characters, but more than anything, the protagonists in this book are ideas. We might call The Inevitable Gift Shop collage – a collage of the ideas that are created within the human imagination.

What’s fascinating about works of collage in literature, where short paragraphs and vignettes are brought together as a collection of fragments to create a whole – alongside Eaves’s latest two books, think Reality Hunger by David Shields or What I heard about Iraq by Eliot Weinberger – is the exciting sense of newness contained within them. In Reality Hunger, Shields contests that neither fiction nor non-fiction, in their current forms and structures, adequately meet the needs of the 21st Century reader. And in this new structure we see again here in The Inevitable Gift Shop, we perhaps see a possible alternative model for writing and literature. This is something Eaves touches upon early on in The Inevitable Gift Shop:

“A literary convention is a retrospective abstraction. It exists only in relation to the experiment or the revolution that overturns it. It doesn’t exist until someone does something new and you see how far you’ve come. Form and content, in other words. There is a widespread misconception about form, as the poet Elizabeth Jennings once pointed out: it is not a jelly mould into which one pours content. Rather, the two things are co-eval. Form will arise to express content, and the established forms (sonnets, novels, collage) are those that, like an evolutionary convergent body shape, have by long trial shown themselves to be optimally expressive.”

The novel and the sonnet have been with us now for centuries, with precious few innovations in form and structure between their invention and now. Collage has been with us since the 20th Century and has largely existed within visual media – art, montage in cinema. The marriage between collage and the novel (and indeed poetic forms) as displayed here is perhaps the beginning of a new revolution that overturns previous literary conventions. The question one might rightly ask when you see how well books like The Inevitable Gift Shop work is, “well, what’s taken so long?” It feels as though the book almost proves that the narratives we are accustomed to are long overdue a makeover.

In Self Help, Lorrie Moore wrote that “plots are for dead people” – the traditional narrative format and structure cannot serve the living. Eaves breaks apart the traditional model for something far more engaging; and far more alive. The poetry is, at times, penetratingly devastating simply for the real, life-lived truth it exposes – consider the line from The Crossings, for instance: “you choose a friend for life as you might choose a seat”. While the prose moves you, as you read it, through ideas and emotions, asking you to seek out new ways of looking at the world.

You can recognise good art and good writing if it surprises you. And, boy, can this book surprise you. Just as you are critiquing Shakespeare’s 37th Sonnet, a line of pure magic – “I eat fish with a clear conscious because they neglect their young” – will fly out and catch you off guard, shifting the tone in an exhilarating rush.

The structure of Eaves’s novel allows readers to pull away from notions of narrative as an important – or indeed central – part of any story or essay. This is important, because it allows us to move toward contemplation, and is more conducive to helping us expand our own understanding of both the ideas contained within the book, and the thoughts and ideas they inspire within us as we read.

Consider, for instance, Eaves’s skilful and fascinating literary critiques and analysis – present throughout the book in analysis of Shakespeare’s sonnets, but also Madame Bovary, and indeed the works of other literary critics. One of the longest sections in the book focuses on William Golding’s The Inheritors – a brilliant novel in its own right – and Eaves guides us through Golding’s book, its plot and themes, and leaves us considering not only the novel; but “the whole of human history” – a concept so brilliantly large and fascinating in itself that we immediately find our imaginations stirred, our horizons widened.

The writing is sharp and fresh, and the work as a whole is inquisitive, analytical, contemplative; significant. Subtitled “A memoir by other means”, there is something incredibly personal about the book, which is surely appropriate for a memoir, and in the end it leaves you feeling as though you’ve spent a long while in the intimate company of a stranger, who nonetheless somehow feels achingly familiar.

Frequently hilarious– “really what tortoises teach you about is abusive relationships” – there is almost a cinematic element. Both through the vivid descriptions of the natural and man-made world, and also in the way the collage effect feels not unlike a visual montage; whereby overall meaning is not to be found in any one section or episode but instead created by the juxtaposition of each of the different fragments and bits and pieces intercut together. Of course, while a viewer’s relationship with a montage is relatively binary – you watch the images on a screen in front of you – the reader’s relationship with The Inevitable Gift Shop is far more interesting. It’s interactive. By picking through the options, it’s possible to arrange the overarching narrative in different ways; and to find new meanings contained within it.

It’s a book that demands to be read and re-read – and then re-read again; both front to back, back to front, and in all other manner of combinations. The perfect book to revisit.