The average British family is set to spend almost £800 on Christmas this year – and their American counterparts will themselves spend around US$950. That’s an awful lot of turkey and cranberry sauce to go with all those horrible socks for your uncle and those whisky stones for your hipster brother – not to forget that Rick and Morty version of Monopoly for your sister or that tartan scarf for your mother-in-law to go with all the other tartan scarves you’ve bought her every other Christmas.

While there’s nothing wrong with copious amounts of cranberry sauce or horrible socks necessarily, it goes without saying that Christmas is so often a time of purchasing for the sake of purchasing only in honour of the religion of consumerism, rather than anything more meaningful. There’s obviously a problem here, as David Foster Wallace would put it: “if you worship money and things – if they are where you tap real meaning from life – then you will never have enough.”

So what purchases can you make this year that provide more of that “real meaning”? Well, we’ve come to the conclusion that some of the best purchases you can make this Christmas may be on items that have a far longer shelf-life and far greater usability than Star Wars fruit and utensils.

We are, of course, talking about books. Not only can they be read again and again, and invite us to explore new worlds and entire new universes, they also help us think differently about the world – and they teach us about wonderful new ideas. They’re also good for us, too. As this paper in the journal Science points out, reading literary works cultivates a skill known as “theory of mind”, which is described as the “ability to ‘read’ the thoughts and feelings of others.” So books make us nicer, basically. If there is anything more appropriate at Christmas, then, we certainly haven’t come across it.

So which books should you buy for those special people in your life whose stockings you need to fill? To help you narrow your options down, take a look at some of our suggestions, below:

1. Christmas with dull people, by Saki

‘They say (said Reginald) that there’s nothing sadder than victory except defeat. If you’ve ever stayed with dull people during what is alleged to be the festive season, you can probably revise that saying.’

Hector Hugh Munro, better known by his pen name, Saki, was a master of wit and satire in the Edwardian era. Here, Daunt Books has reproduced four of his short stories that explore one the most dangerous aspects of Christmas: dealing with dull people. Saki expertly, and with an incredible precision of wit, deconstructs those most ghastly and perilous aspects of the holiday period, from being given unwanted gifts to writing thank you notes. Short and sharp enough to devour before breakfast on Christmas Day – and, crucially, small enough to fit in any size of present-filling footwear – this is an excellent stocking filler for anyone who pleasures in moaning about the festive holiday before getting into the swing of it all.

126 little books to choose from – each around 60 pages long – give you a wealth of options to explore. These extracts of wider classical literary works are sure to offer choices to meet all literary tastes. Authors include Karl Marx, Jane Austen, Jonathan Swift, Virginia Woolf, Friedrich Nietzsche, Plato, Caligula, Keats, Flaubert, Dostoevsky and Dickens. What’s not to love?

3. This is the place to be, by Lara Pawson

Nominated for the Gordon Burn Prize, as well as the PEN Ackerley and the Bread & Roses awards, This is the place to be, by Lara Pawson, is one hell of a good read. Small enough to fit in your stocking, it still packs a massive punch in the proverbial “feels” as it moves with a delicate precision through personal anecdotes of the author, taking us from the market at Walthomstow to the harrowing experiences of war in Angola. There’s an immense honesty within this book that carries us through from start to finish – with each vignette or mini-story contained within it perfect for sharing together around a Christmas fire or over a large bottle of brandy.

4. On being nice, by the School of Life 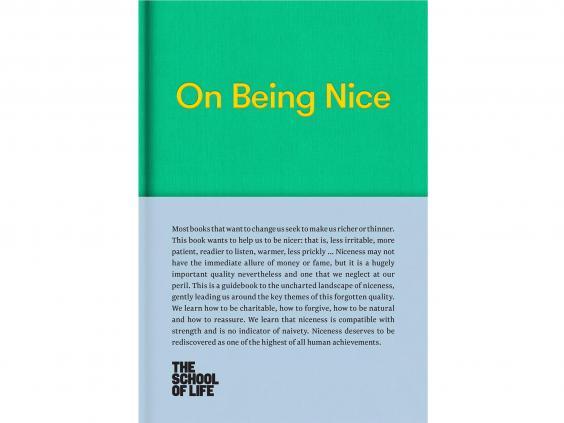 Most books that want to change us seek to make us richer or thinner. This book wants to help us to be nicer: that is, less irritable, more patient, readier to listen, warmer, less prickly. Niceness may not have the immediate allure of money or fame, but it is a hugely important quality nevertheless and one that we neglect at our peril.

Produced by those wonderful folk at The School of Life – the same folk who gave us this lovely meditation on what literature is actually for – On being nice states that niceness “deserves to be rediscovered as one of the highest of all human achievements”. In the era of Donald Trump, Brexit, rising hate crime and geopolitical tensions, it’s a lesson we would do well to learn, whether it’s Christmas time or not.

Speaking of people being nicer to one another, how about the latest iteration of the Corbyn colouring book? In a year that saw over 40% of the UK vote for the radical socialist and hope-filled policies of Jeremy Corbyn’s labour party – forcing the much-maligned (and malignant) Conservative government to sign a desperate deal with the terrorist-sympathising DUP – this book is a fine addition to the new canon of colouring books for adults.

Designed by James Nunn, the new version invited you to “relive the excitement of #GE2017 over and over again.” To the colouring pencils, comrades!

The Absent Therapist (TAT) saw Will Eaves shortlisted for the prestigious Goldsmith Prize, and you can see why. Technically described as a novel, this delightful little book will fit any stocking – but would also be a great find under the Christmas tree. A collection of mini-narratives, each with a precise tone and occasional touches of poetry, feature stories of artificial intelligence and musings on philosophy, of travel and adventure, and of course, family feuds – without which it simply wouldn’t be Christmas.

Cousin to TAT, The Inevitable Gift Shop, is similarly groundbreaking and unique (as we’ve noted before). Described as ‘a memoir by other means’, it’s not at all plot driven. Rather, this work of collage brings together bits and pieces of memoir, fictional prose, poetry, essay and non-fiction. Interactive, funny, insightful and thought provoking in equal turns, it’s a perfect book to revisit time and time again.

7. Ignore those rip-off ‘Children books for adults’ – get the original instead

It now seems as though the shelves of all bookstores and department stores are full of these ‘adult children’s books’; semi-funny spoof versions of the books we grew up reading as children. You know the ones – “The Ladybird book of the Wife”; “Five go to an office Christmas party”; “Mr Tickle gets arrested for sexual assault”, etc. etc.

The trouble with these books, however, is that they are so obviously part of a fad trend built up by the publishing industry to keep their noses afloat as sales of literary fiction crash. And while that might be excusable, the fact that these are rip-off copies of an idea by one independent artist – who was then sued for copyright by Penguin only to see the publishing giant steal her idea for their own gain – leave a somewhat sour taste in the mouth.

So, this Christmas, don’t pick up the latest gimmick – go for the original thing and get a copy of ‘We Go to the Gallery’ from Dung Beetle Books.