The Goldsmith Prize – the literary award for “fiction at its most novel” – has nominated the author for the second time for his acclaimed novel Murmur, inspired by the real-life tragedy of Alan Turing.

Published by CB Editions – an exemplar of quality in independent publishing – Murmur follows The Absent Therapist as the second of Eaves’s books to be nominated for the prize.

It should perhaps come as little surprise to see Eaves on the shortlist once again. His work has repeatedly pushed the boundaries of modern literary writing, with Murmur, in particular, a real treat. As Nothing in the Rulebook’s own Professor Wu wrote:

“For all that the writing is excellent (as we have come to expect with Will Eaves); and for all that the book grapples with a veritable menagerie of ‘worthy’ ideas (there are so many more we could have discussed at length in this review); and for all that it provides another worthy voice to consider in the ongoing conversations surrounding artificial intelligence – none of these are really what the book is ‘all about’, or what readers should take away as being the most important aspect of Murmur. Because ultimately, what it all comes down to is that this is a novel about love. And it is the way in which Eaves presents this most human of emotions, that really makes this novel truly intelligent.”

The Goldsmith Prize was co-founded by Goldsmiths and the New Statesman in 2013 to reward “fiction that breaks the mould or extends the possibilities of the novel form”. In its four years it has launched new literary stars – Eimear McBride, who won the first prize – and changed the debate around what readers and publishers look for in a novel. Ali Smith has credited the prize with altering the publishing landscape: “The change it’s made is that publishers, who never take risks in anything, are taking risks on works which are much more experimental than they would’ve two years ago,” she told the Bookseller in 2015. “That, to me, is like a miracle.”

At a time when mainstream publishing so often seems concerned with publishing novels that are little more than copies of previously commercially successful novels, literary awards like the Goldsmith Prize are vital in supporting and promoting the work of new and adventurous writers.

Eaves has been joined by five other excellent authors, each with searingly original books of their own that very much hold the potential to reshape the way we approach the construction of novels.

Indeed, as Professor Adam Mars-Jones notes: “the 2018 shortlist offers a tasting menu of all that is fresh and inventive in contemporary British and Irish fiction. There’s poetic language here, not all of it in the verse novel selected, Robin Robertson’s The Long Take.  There’s the language of the streets, fighting to be heard, in Guy Gunaratne’s In Our Mad and Furious City and the language of an overmediated world in Olivia Laing’s Twitter-fed Crudo. There’s a cool survey of the unbalanced present in Rachel Cusk’s hypnotic Kudos, while the deceptively quiet unspooling of Gabriel Josipovici’s The Cemetery in Barnes shows the powerful effects that can be achieved without ever raising your voice.’ 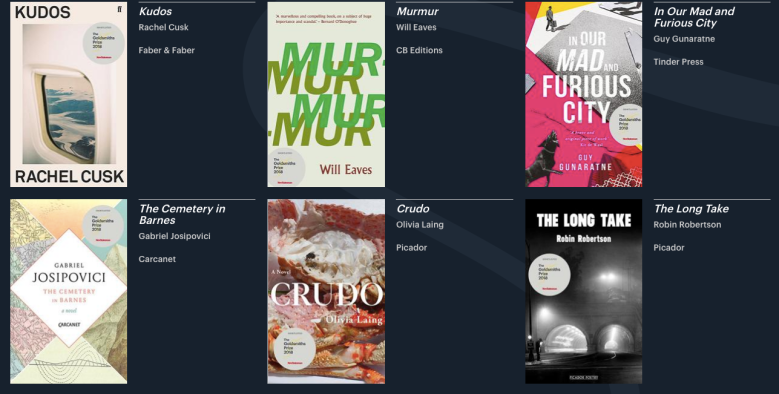 Guy Gunaratne – In Our Mad and Furious City

Gabriel Josipovici – The Cemetery in Barnes

The winner of the award will be announced on 14 November. More information on the award can be found online.

Check out Nothing in the Rulebook’s interview with Will Eaves here.