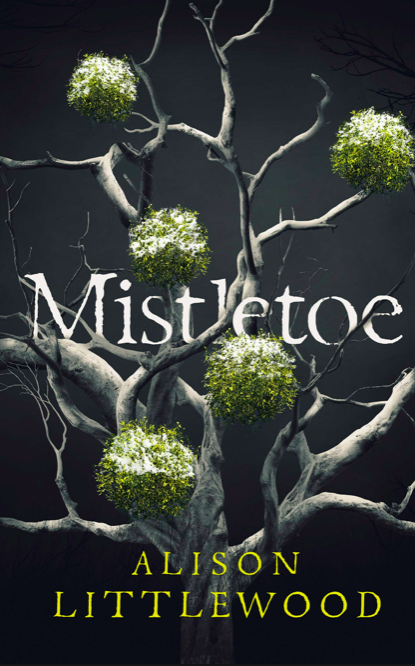 Alison Littlewood doesn’t believe in ghosts but she does think writing is magic.

‘It might have been Stephen King in On Writing who calls it ‘strange telepathy’, the way we can transmit ideas and emotions to each other,’ she tells me. ‘There is something magic about it.’

We’re in the Crime Section of Lindum Books, where Littlewood has been signing copies of her latest novel for attendees of her Christmas-themed talk.  It’s early December and Lincoln has been Christmassed in preparation for the market this weekend. Earlier, Alison gave her talk in the basement of the ice-cream parlour next door, where guests helped themselves to mince-pies, tea, cake and coffee, listened as she talked them through her writing process, her inspiration and her fascination with Christmas.

‘I think there is a part of us that is still very animalistic,’ she said. ‘Wondering what is out there in the dark while we sit, safe and warm, inside by the fire. I think that’s why ghost stories are so popular at this time of year.’

Littlewood would know; her eighth novel, Mistletoe, is a ghost story set during the festive season. It follows Leah, a young woman looking for a new life following the tragic deaths of her husband and son. Of course, when she moves to a run-down farmhouse in Yorkshire, creepy things start happening and soon old ghosts threaten to drag her back into her own haunting past.

Though she’s always been fascinated by books and stories, it wasn’t until Littlewood was in her thirties, no longer inspired by her job in marketing, that she started writing seriously. Even then, she says she had no presumptions about getting published.

‘I forced myself to sign up for a local writing class and started that way,’ she says. ‘I realised it was something I just loved to do. I had a secret dream of a book with my name on it but I didn’t especially think that’s where I would be. I loved it so I just kept writing for its own sake and it led me to places I never would have imagined. This is my eighth book and I’ve written a couple of short story collections. I never thought any of this would happen.’

Littlewood is small and softly-spoken; her Yorkshire accent gives her words real warmth. As she talks about her early reading days, going to the library with her mum, it is clear the spark in the little girl still burns in the woman.

‘There was a huge old, print map of the world on the wall of the children’s library with all the shelves underneath it,’ she says. ‘It did feel like you were just being let loose into this amazing big world. The first book I remember being in love with was Hans Christian Anderson’s Fairy Tales. I cried buckets over The Little Mermaid but I loved it because it made me cry. I used to love writing little books and drawing pictures but then I kind of lost it. I thought writing books was something other people did. It wasn’t until I was in my thirties that I returned to it. I sometimes think that little five-year-old knew what it took me years to discover again.’

Once she discovered it, however, she cracked on. Littlewood started out writing short stories, then tackled NanoWriMo (National Novel-Writing Month) a couple of times before finishing her first novel A Cold Season. This, to Littlewood’s surprise, was selected as part of the 2012 Richard and Judy Bookclub.

‘They don’t normally go for horror,’ she said. ‘So it was a real shock. I didn’t think it would even get published, so to walk past WH Smith and see it in the window was amazing.’

Since then, Littlewood has written seven more novels and contributed many short stories to anthologies. However, she maintains that her working day is unchanged, despite her success.

‘My writing day is dictated by my dogs,’ she said. ‘They sit by me while I write and get quite cross if they think it’s time for them to have lunch when it isn’t.’

The dogs prove useful, however. They get her out of the house, give her an excuse to clear her head. She also says she has buried fictional bodies on the beauty spots where they walk; while they sniff around, she wonders what it would take to get a body up that hill, through that path of woodland. The house in which she now lives, an old Yorkshire farmhouse, is also a useful setting for stories, again blending the homely and the haunting.

Littlewood is also active in the writing community, quick to recommend other writers. Her most chilling, recent read? Ghoster by Jason Arnopp.

‘If you’re looking for a ghost story that really represents now, contemporary time, he’s great,’ she says. ‘He uses modern technology a lot. He takes people’s online behaviour and phone addictions and turns them into really exciting, well-written books.’

Littlewood herself tends to steer away from technology, delves deep into the past. Snowfall is useful for isolating characters, she says, and it’s important to establish dodgy phone signal early on in the plot, so it doesn’t seem too convenient later. She’s drawn to the Victorian era and the gothic as a setting, having used it in two of her previous works and will return to it again for her next novel. She can’t say too much about it just yet but reveals that it’s based on a real incident that happened at a school.

‘People started thinking they were seeing a teacher where it was impossible for her to be,’ she says. ‘That’s probably all I can say about it right now. It’s not a ghost story but there are a few similarities.’

Outside, Christmas lights stretch between buildings, twinkle over the dark street. The other shops are closed but trees glow in the windows. Across the road, The White Hart Hotel leaks laughter onto the cobbles. But around the corner, there’s the castle and the cathedral. The cathedral, holding the remains of kings, queens and bishops. The castle, where prisoners were hanged from the roof of Cobb Hall, buried in Lucy Tower. This small square between the buildings: how many footsteps have crossed it? How many stories?

Nothing in the Rulebook editor, Ellen Lavelle, is a graduate of the University of Warwick’s prestigious Writing Programme. An aspiring novelist and screenwriter, she has worked with The Young Journalist Academy since the age of fourteen, writing articles and making short films for their website. She’s currently working on a crime novel, a historical fiction novel and the script for a period drama. She interviews authors for her blog and you can follow her @ellenrlavelle on Twitter. She is currently commissioning features for Nothing in the Rulebook and can be reached via the nitrbeditor@gmail.com email address.