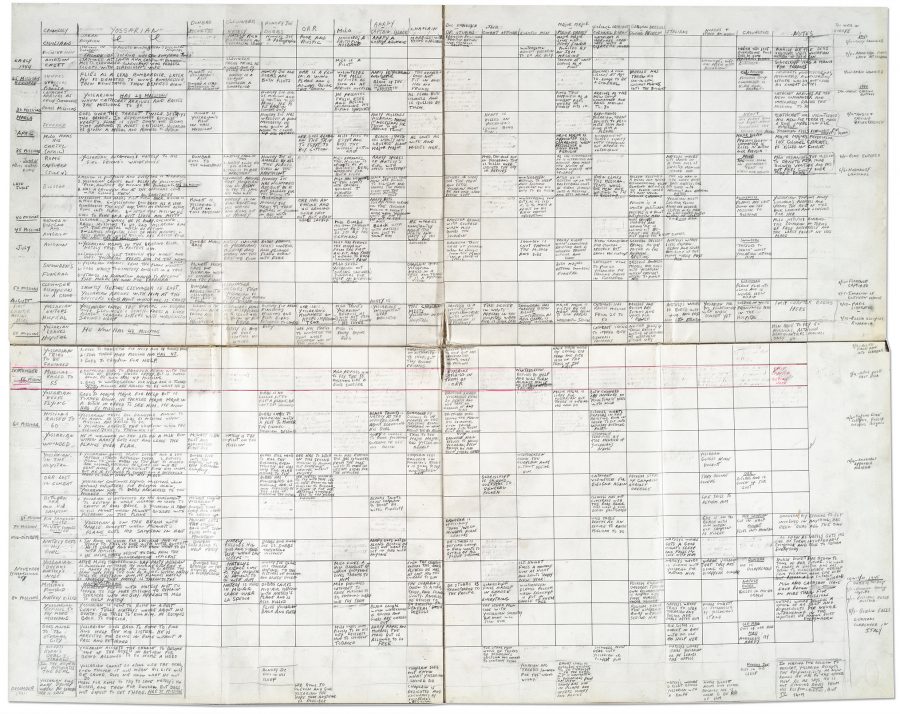 When ‘Catch-22’ was first published, Evelyn Waugh said that those who claimed it was a novel were “mistaken”, instead arguing the book was “a collection of sketches — often repetitious — totally without structure.”

Yet what Waugh couldn’t (or perhaps didn’t want) to see at the time, was that Heller’s work was actually the product of acute compositional rigour – with all the pieces, scenes, characters and events interlinking and joined together in a clear narrative. That the book might appear to be very much post-structural and jumbled, was, it seems entirely the point. Indeed, for evidence, we have Heller’s own handwritten outline (which you can view both at the top of this article and here below). You can also find a more legible version here.

The outline’s grid presents the events of the story in chronological order, as the novel itself certainly doesn’t. The rows of its vertical axis run from early 1944 at the top to December 1944 at the bottom, and the columns of its horizontal axis lists the book’s major characters. They include the protagonist John Yossarian, Air Force bombardier; the “poor and rustic” Orr; Colonel Cathcart, a “Harvard graduate with a cigarette holder,” and Major Major, who “looks like Henry Fonda.” Within this matrix Heller kept track of what should happen to which characters when, at the time of which events of the real war.

The descriptions of events sketched on the outline range from the broadly comic (“Chaplain spies Yossarian naked in a tree and thinks it is a mystical vision”) to the cynical (“Milo justifies bombing the squadron in terms of free enterprise and the large profit he has made”) to the straightforwardly brutal (“Snowden is shot through the middle and dies”).

For fans of Heller’s work, this is a treasure trove of rich detail and insights into the author’s way of working. Yet it also provides a valuable resource for aspiring writers and students of literature. For here we have a pre-composition of narrative, and a clear guide on the importance of structure (even when you’re looking to create a piece of work that might appear otherwise free from it).

Looking at Heller’s handwritten outline, it’s also clear just how much thought has gone into the book’s plot, and why it is something to admire. Indeed, it’s easy to see why Guardian Reading group contributor Palfreyman described the book’s brilliant structure thus:

“I think of it as a helix, like the threading on a screw or bolt. Heller keeps us circling back to a seeming repetition of incidents and tropes and jokes until we get dizzy. But actually, almost imperceptibly, the way a screw goes forward even as you are actually turning it clockwise, the plot progresses – so that, towards the end, you begin to realise … all the repetitive jokes and themes … have been leading up to this.”

So, writers and readers, over to you. Do you spend your time plotting out (in meticulous detail) your novel’s structure? Or do you deconstruct the books you read in the same way Heller (pre-)constructed his own novel? Let us know in the comments below!