This summer, thousands of shows, actors, directors, writers, musicians and other creatives descending upon the streets of Edinburgh for the world famous Fringe festival. As a collective of creatives, this very much feels like our sort of jam – the diversity of artistic talent on display is enough to make your creative tastebuds start salivating just at the thought of it.

Yet with almost 4000 shows to choose from spread across 323 venues, how to choose what to go and see while you’re in town?

To help you decide, we’ve gone through and hand-picked some of the most all-round tip-top looking shows and performances for you to go and watch, and get involved with. 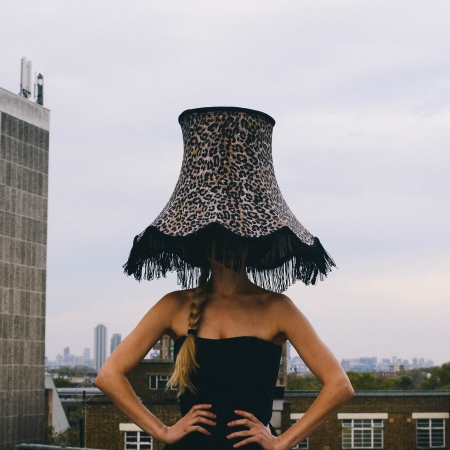 Ever since Katie was cast as the lead in her primary school Christmas show “Santa’s Snow Mobile” she believed there was a place for her in show business. Since then named, speaking and fully clothed roles have been hard to come by…

Sexy Lamp, winner of Show of the Week at VAULT festival 2019, brilliantly combines comedy, original songs and storytelling to shed a bright light on how ridiculous the industry can be and why writer and performer Katie Arnstein is refusing to stay in the dark any longer.

From the writer and performer of Bicycles and Fish, and winner of Show of the Week at VAULT Festival 2018, you might have come for the lamps; but you’ll stay for the luminescence of the performance, and you’ll come away enlightened.

Check out Nothing in the Rulebook‘s review of Sexy Lamp here, and our ‘Creatives in Profile’ interview with Arnstein here.

Pick up tickets for yourselves here https://tickets.edfringe.com/whats-on/sexy-lamp

Objectively Funny is a baby in Edinburgh terms, this being its first foray into multi-show production at the Fringe. We know they’re not ones to shy away from a bit of graft though, having run two massive festivals in London (‘the art form’s cutting edge’ – Guardian) and programming prestigious comedy venue The Albany. Perhaps it’s no surprise then that they’re producing a massive 10 shows at the Fringe and running a campaign to improve mental health support for the industry.

These two one-offs (this two-off?!) will raise money for their charitable partnership with national good-doers CALM, and fund their own freely-available professionally-delivered peer support mental health workshops.

Martin Willis, the comedian and founder of Objectively Funny, said of the Night, “We have a lot going on at the Fringe this year, developing shows with some incredibly exciting young talent and doing what we can to improve the experience of anyone working at the Fringe. These two nights are a great opportunity to showcase everything we’re about, with some of our funniest friends on board too. Plus it starts at 11pm, so it’ll be a proper party.”

Follow Objectively Funny in all the social media places: 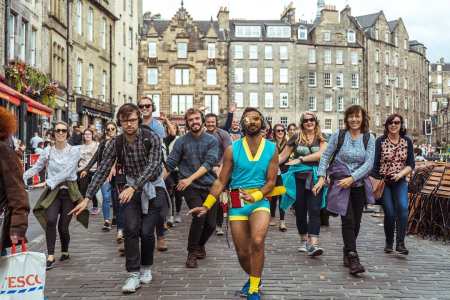 Guru Dudu are a company of performers and facilitators who are passionate about using play, love an laughter to engage people towards greater connection with themselves, each other and the outside world. Originating from Melbourne, they are now branching out into other cities in Australia, UK and Europe.

Since 2013, Guru Dudu’s silent walking tours have been tearing up the festival circuit, offering participants a unique blend of interpretative dance, crazy improvisation, and spontaneous flash mobbing through different cultural settings. Inspiring and insane in perhaps equal measure, they offer participants an extremely rare thing in a day and age so often defined by rules and limitations: they offer people permission to play and celebrate their creative and quirky selves.

Last year, Nothing in the Rulebook caught up with Senor Samba (pictured above) in an interview full of lycra and Bohemian Rhapsody.

Check out available time slots and get yourselves on one of these tours through Guru Dudu’s website https://www.gurududu.org/fringe/

How is it just as easy to order a date on-line as it is to purchase a chicken burger?

In 30 years, the cultural change in courtship has been vast. Today, overwhelmed by technology, are we losing sight of what human connection truly is…?

Join Polly as she navigates the perils of love in the digital age. Armed with all the latest dating apps and sites, Polly rides the waves of players, lovers, weirdos – and everything between. Based entirely on real-life experiences, this hilarious, romping, multimedia exposé of modern dating scrutinises the deeper, brutal side of love and life, challenging our preconceptions of women and dating, sex and autonomy.

From dreadful dates to exciting encounters, Tinder swiping, sexting, dick pics, pressuring parents and supportive friends… why is Polly so desperate…? What lies behind her relentless campaign…? And what might any of us do when our world falls apart?

Hot on the heels of #MeToo and diving unapologetically into the darker sides of love and life, Lobster unpicks women’s experiences of modern dating with careful and incisive observation.

Remember when I got cancer and had a breakdown in Tesco’s? Then literally went mental and posted some songs on Twitter?

When anxiety was at full capacity level, my mum bought me a ukulele and it has saved my life. I wrote some songs and randomly posted them online. Shit. Got. Real! Before I knew it there were millions of hits. I have no idea how it has all happened but people just seemed to relate to my random bedroom tales!

Starring Amy Booth-Steel (@AmyBoothSteel) and directed by Kathy Burke (@KathyBurke), this is a common story about common people. Check. It. Out.

World-famous lothario, swordsman and butthead Rodolfo is back! Following an unspeakable tragedy he turns his back on his lifestyle – rejects the sword, takes a vow of chastity and joins the priesthood. But as dark forces rise he must face personal demons and battle actual demons. A supernatural action-adventure and follow-up to the 2018 smash-hit Don Rodolfo, and the creation of Winner of  Ciarán Dowd, the Guardian describes this as “comedy of the most ridiculous variety”.

Holly Morgan is a Witch. Get her!

Witches be trippin’. Witches be cray. Witches be just nice old ladies who live independently in a woodland retreat. Joined by her familiar, Tom the Cat, comedian Holly Morgan summons your favourite witches through song (stand up Stevie Nicks!) to put a hex on the patriarchy, one (barely researched) historical anecdote at a time. Witch? Please!