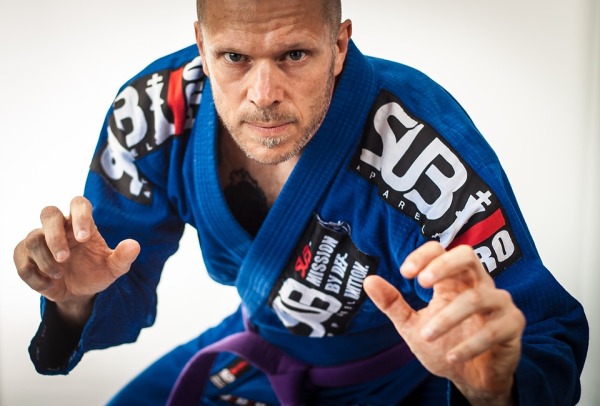 The handshakes, that’s how I first know I’m in trouble.

I’m at a Jiu-Jitsu class. Wednesday. I’m recovering from the usual winter cold, have even opened my email twice that day to compose an excuse.

Sorry, Kev. I’m feeling under the weather – can I rearrange for next week?

Delete. If I send that I won’t ever go.

Down a coffee. Get in the car. Drive to the gym.

Now, the handshakes. There are ten men and each greets me by gripping my hand and telling me their name – I forget the names but remember the grips. I don’t know if it’s the coffee or the panic, but I don’t feel ill any more.

What followed was like a nature documentary, but instead of Attenborough’s voice putting the gazelle’s death into perspective, it was the sweaty grunting of ten men and me making noises like Kermit with tuberculosis. They choke me out, one after the other but are very polite about it.

I learn a few techniques and try to use them, without much success – still, I am getting better, surviving longer before they politely choke me. I start to figure that it’s about strategy, not just muscle and reflex. I have been using all of my strength and “gassing out,” while these men, some in their sixties, are effortlessly squishing me like soft cheese. Then they reacquaint me with their grips. Around my neck this time.

I stay on for the advanced class and start to last a little longer before tapping out. All the while, there is a strange thought in the back of my head: if these were fights to the death, I would be dead twenty-six times.

I shake Kev’s hand, tell him I’ll be back for the next class, and leave with a smile. I am sore all over, have burns on my fingers and toes, but I keep replaying what I’ve learnt as I drive home, and later, when I’m lying in bed, I can’t sleep because I’m thinking of how I will improve next time, how I will change my game.

Now, I have been to four Jiu-Jitsu classes. I know nothing. But already, I’m noticing how it affects other areas of my life – my writing in particular. So… why?

Failure. Nothing acquaints you with it better than Jiu-Jitsu. You will be choked. But after a while, that becomes not so scary. And then, once failure is accepted as a necessary step for growth, once it is seen that the only way you learn is through doing something wrong in the first place, there is a feeling of freedom. Get choked. Get up. Go again. You know better this time. If you aren’t afraid to fail, you are willing to try new things, to play risky, to be interesting. Same with writing, and everything else worth pursuing, failure is inevitable – bad drafts, abandoned projects, rejections. Every novelist I know has a project-graveyard file on their computer. That is no source of shame. It is a mark of craft. Lose the fear of losing. A winner is someone who never let loss stop them.

Struggle. We as human beings are not built for sitting on beaches with cocktails. That is nice for a while, but only for a while. We need a target. Something with which to contend. Placing happiness as all important is wrong – better to pursue something difficult, something worth the struggle, something with meaning. Often it isn’t pleasant, but in pursuing that target, you are fulfilled. Do something difficult, just to see if you can. You will surprise yourself. Struggle upwards, towards a goal, and you’ll have something better than brief happiness. It’s why we run marathons, why we climb mountains, and it is why we writers choose to sit and write every day when we’d much rather be somewhere else. We turn up, at the desk, ready to contend. It requires an immense amount of work and effort – the trek out into that hinterland of composition. We are grappling with plot, emotions, ideas, and that greater thing, that unconscious current which dictates the direction we pursue, which word follows the previous. Jiu-Jitsu is just a physical manifestation of that which happens every day at the desk. You are willingly contending with something difficult, and it is often painful, but once it is over, you know it was worth it, and you can’t wait to go again, to see if you will be better. To see what you will learn this time.

A piece of writing is just a by-product of this process of struggle. This contention with the unconscious, the constant working and re-working. If something is jarring with the rest of the work, try something different. In doing this, the process itself will become rewarding – the pursuit of the target. The journey becomes what is important, that process of learning. Like Jiu-Jitsu, if something isn’t working, adapt and find the right technique, be satisfied with the journey, the constant reshuffling of set-ups and finishes. Maybe you will be choked in the end. Who cares? A novel is a by-product of the process of contending with the unconscious, of reshuffling and learning. The process is paramount. The pursuit. You don’t make a sandcastle, you abandon the sandpit.

Tenacity. The most important thing. In my last class, Kev, the instructor, rolled with me for the last thirty minutes. My ribcage is still bruised. At one point I think he just sat on me, but I can’t be certain. What I do know is that I didn’t quit. He asked if I wanted to stop but I caught my breath and carried on. And at the end, after my total annihilation, he called me “strong as an ox.” That felt good. Still, I think Kev could easily choke out an ox. I left that class aching, but proud that I had not given up. It’s rare today to encounter that kind of situation, but its good to know that if one were to arise, you have the ability to survive, the tenacity to continue. This directly correlates to writing – 40,000 words into a novel, it will feel like Kev is sitting on your chest. Be an ox. Kev will still sit on you, but the important thing is that you aren’t quitting.

Aggression. Everyone harbours it, no matter what they tell you or themselves. It’s normal. However, it will manifest itself in other, unwanted, parts of life if not acknowledged and integrated. Jiu-Jitsu lets you channel that aggression, and in doing so, gives you the confidence to integrate that assertive side in your life, when people might try to take advantage, when you need to stand up for yourself. It becomes a tool rather than a hindrance. There are circumstances where being nice just isn’t helpful – that isn’t to say that everyone should be an ass all the time. But for those of us who struggle to say no, whose first instinct is to be agreeable, this integration is life-changing. It’s a confidence. A self-belief. Again, an important quality for writers, who are (myself included) some of the most self-critical people around.

Humility. Try enduring a ritual strangling twice a week. It quickly teaches you humility. Appreciate that you will always be learning, that there are others who know more, that cockiness is laziness. If you are humble you are active, always trying to improve the work, but someone who believes they know everything has given up their desire to learn. Inactive. “There are no egos here,” is the phrase they use like a prayer or affirmation. It is a constant reminder that we are all learning, that we are all on the path – as Ursula Le Guin says so perfectly, “It is good to have an end to journey toward; but it is the journey that matters, in the end.”

I am halfway through writing a novel at the moment. Kev is sitting on my chest, but I am not quitting. So, on Wednesday, I’ll be back for another choking, and when I get home, I will write my 500 words.

Both are painful, but worth it.

Christopher Baker is a writer, published in the Writers of the Future 35th anthology and with theatre work that has won The Stage Award at Edinburgh Fringe. He graduated from the Warwick Writing programme with a First Class BA Hons in English Literature & Creative Writing. He has three dogs and is often covered in their hair. His twitter is @CSBker