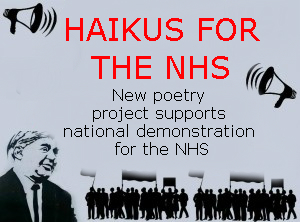 Somerset-based poet and musician John Blackmore has been announced as the winner of Nothing in the Rulebook‘s inaugural poetry competition, ‘Haikus for the NHS‘.

Blackmore’s poem was chosen from a shortlist of haikus by the poets Eva Reed, Juliet Staveley and Sarah Purvis. These haikus will be printed and distributed liberally during the national demonstration to support the NHS on Saturday 4 March.

“Against a backdrop of gross underfunding, continued cuts and closures of NHS services, and the increasing trend towards marketization and privatisation, the Conservative party are destroying one of the greatest achievements of working class people in Britain,” the founders of Nothing in the Rulebook said in a joint statement. “We are looking to use the power of poetry as protest to spread messages of support for the NHS and what it stands for.”

“We have been blown away by how popular our project proved – we received almost 200 haiku submissions, so many of which were of an incredibly high quality. We’d like to take the opportunity to thank each and every person who submitted haikus – especially those we received from international writers and poets. We had entries from Australia and the USA, with people getting in touch to say they want to lend a hand in whatever way possible to support an institution that is treasured not just in the UK but across the world,” they added.

“It demonstrates, really, both what makes the NHS so important; as well as the power of poetry as protest. It was fascinating to see how many haikus captured a powerful yet meditative sense of emotion that stays with you for days after reading what is, lest we forget, such a short-hand form of poetry.”

John Blackmore is a singer, songwriter, poet and English teacher based in Somerset. Much of his music (listen on Soundcloud) and writing draws on his experiences of, and interactions with, the people and places of his native west country. In 2011, John was a semi-finalist in the BBC Radio 2 Young Folk Award and, in 2014, he contributed music and literary comment to a BBC Radio 4 documentary concerning the Victorian Dorset Dialect poet William Barnes. He is part of the Poetry Society’s ‘Young Poets Network’ (read his prize-winning poems here).