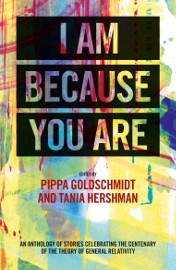 In November 1915 Albert Einstein published his now world famous General Theory of Relativity. It introduced to physics new concepts, such as the curvature of space-time and black holes, and it made extraordinary predictions about the bending of light around massive objects. I Am Because You Are is a timely collection of new fiction and non-fiction from novelists and science writers, all inspired by the theme of Relativity. Each contributor treats the subject in their own unique way. The results are charming, witty, sometimes challenging but always accessible, presenting complex science themes in imaginative, easy-to-understand and highly entertaining ways.

Contributors include novelists Andrew Crumey, Dilys Rose and Neil Williamson, alongside popular science communicators Pedro Ferreira and Jo Dunkley. Edited by acclaimed, award-winning writers Pippa Goldschmidt and Tania Hershman, I Am Because You Are will be the perfect vehicle for both press and public to engage with this landmark centenary.

Michael Brooks, author of 13 Things That Don’t Make Sense, said of the new anthology: “Sparkling with wit and originality, making a virtue out of the frail humanity of science, these stories perfectly reflect the breathtaking poetry of Einstein’s greatest theory. Enlightening, entertaining and sometimes moving, this collection is a beautiful celebration of relativity’s influence on our cultural landscape.”

This collection of fiction and non-fiction is perhaps the way to mark the hugely important 100th anniversary of Einstein’s General Theory of Relativity. And it’s publication by Freight Books taps into massive interest in popular science through imaginative writing.

Tania Hershman spent 13 years as a science journalist, writing for publications such as WIRED and NewScientist, before becoming a full-time fiction writer. Her first story collection, The White Road and Other Stories (Salt, 2008), was commended by the judges of the 2009 Orange Award for New Writers. Her second, My Mother Was An Upright Piano: Fictions, was published in May 2012 by Tangent Books. Tania’s stories and poems have won various prizes, been nominated for a Pushcart Prize, been widely published and broadcast on BBC Radio 3 and 4. Her debut poetry chapbook will be published in Feb 2016.

Pippa Goldschmidt’s novel The Falling Sky (Freight, 2012) was runner-up in the Dundee International Book Prize. She has a PhD in astronomy and worked as an astronomer. She has worked as a writer-in-residence at several academic institutions including most recently the Hanse-Wissenschaftskolleg in Germany. Her short stories, poetry and non-fiction have been broadcast on Radio 4 and published in a wide variety of publications including Gutter, New Writing Scotland and the New York Times. Her story collection The Need for Better Regulation of Outer Space was published by Freight in May 2015.