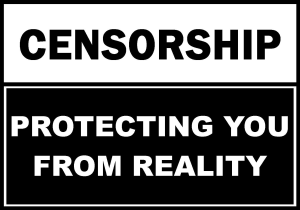 At news award-winning book, The Curious Incident of the Dog in the Night-Time, is set to be pulled from a school reading list over parental concerns about swearing, the debate around language and swearing in literature continues to rage on. But what impact does banning books for supposedly ‘bad’ or ‘offensive’ language actually have, and what message does it send? Professor Wu investigates…

The Whitbread Book of the Year winning novel, Curious Incident, has been pulled from the summer book reading list by a Florida School because, as one parent said: “the f-word is written 28 times, the s-word 18 times, and the c-word makes one appearance […] a few characters also express atheistic beliefs, taking God’s name in vain on nine occasions.”

It’s perhaps easy and over-simplistic to simply write off this latest act of book censorship from the evangelical, overtly hysterical US ‘sensitive parent’ school of thought. The type of thing the character of Kitty Farmer in the film Donnie Darko might do. Yet to do so is perhaps to sideline an otherwise important debate.

Indeed, this is something the author of Curious Incident, Mark Haddon, himself highlights: “The truth is that it always generates a really interesting debate among school kids and librarians and parents, not just about Curious, but about literature and freedom and language, and this is an undeniably good thing,” said Haddon.

The issue here is exactly the point Haddon raises: that at its very core the debate here concerns freedom – freedom of language; of literature; of expression; of culture. And when it comes down to it, attempts to limit and control this freedom are not made solely by fundamentalist Christian parents in Florida who don’t want to read swear words or confront any possibility concerning their religion and belief other than those offered by the bible (which itself, of course, is so full of contradictions that it, perhaps ironically, leaves itself open to almost limitless interpretation – affording readers countless opportunities and possibilities of reading into it however they like to make assumptions that suit them).

Because of course attempts have been made to censor and control creative expression for hundreds, if not thousands of years…

Think of the words of James Kelman, one of Scotland’s most important living writers: “there has never been a time in the history of this country when censorship and suppression did not exist. […] The film, theatre, newspaper and mainstream magazine industry, all exercise censorship, they collude in suppression.”

Of course, Kelman himself has been the subject of this suppression and censorship. In 1994, when Kelman won the Booker Prize for his novel How late it was, how late, the controversy that followed deterred publishers from promoting his subsequent books. Indeed, the author was held up to public ridicule; made out to be something far less than he was. A contemporary columnist at The Times compared the experience of reading Kelman to being stuck in a train carriage with a drunk Glaswegian. It’s possible this columnist may have missed the point of it all.

After all, How late it was, how late, acts as a subversion against attempts to control language. The changes in syntax, the interior monologue technique which leave paragraphs unfinished and the frequent use of expletives such as “fuck”, act as a retort to the conception that there is a “right” and “wrong” way to speak. Because, in truth, there is no such thing as ‘bad language’ – it’s just language. It’s expression.

Lectures on Rhetoric and Belles Lettres

Part of debate against swearing or otherwise non-standard English stems from Adam Smith, who, in 1748, began a conscious effort to standardize the English Language. His Lectures on Rhetoric and Belles Lettres hoped to cultivate “the most imperfect” dialects found in regions of Britain, and sought to do away with anything that deviated from ‘standard’ English.

The crucial flaw in Smith’s works and reasoning, though, is that ‘standard’ English is a myth. The reality of language, the reality of the way we speak and the way we think, is anything but standard. It’s utterly flawed and imperfect – prone to irregularity, syntactical confusion and occasional absurdity. Yet there’s also a certain beauty and truth in this. In fact, it’s only by breaking rules and deviating from ‘the standard’ that we might hope to create new forms of expression – or even new words.

Any literature that therefore does not contain swearing, or some form of irregularity or deviation from Smith’s rules, stands against the natural. This is part of the reason David Shields, author of the acclaimed Reality Hunger, described traditional novels as “unbelievably predictable, tired, contrived and essentially purposeless.”

It’s clear why such attacks against the novel can be well-founded. After all, there is certainly something contrived about characters who only speak eloquently – if not perfectly (with a masterful use of all grammar and punctuation). This is indeed something Kelman rails against in his essay The Importance of Glasgow in my work:

“Look at the nice stalwart upperclass English Hero (occasionally Scottish but with no linguistic variation), whose words on the page were always absolutely splendidly proper and pure and pristinely accurate, whether in dialogue or without. And what grammar! Colons and semi-colons! Straight out of their mouths! An incredible mastery of language.”

Yet not only is there something problematic here from the point of view of accuracy, realism and truth; there’s possibly something more troubling and disconcerting at any attempt to control language and freedom of expression.

Just think of Irvine Welsh, author of Trainspotting (a book which has three instances of “cunt”, one of “fuck” and one of “fucking” on the first page). Welsh rails against moves to censor literature on the basis of swearing – and explains:

“it seems to be an attempt to erase and/or marginalise certain cultures, i.e. the working class, the ghetto and so on. Language is a living, organic thing. If you try to control that and prescribe what people say, the next thing is prescribing what people think.”

Such concerns of course follow the thoughts of Orwell, who wrote in Politics of the English Language that “If thought corrupts language, language can also corrupt thought.” Indeed, Orwell also refuted the idea that one should follow “a ‘standard English’ which must never be departed from” – rather, he said, “correct grammar and syntax are of no importance so long as one makes one’s meaning clear”.

What this again illustrates is that to suggest a book is of poor quality because it deviates from the norm or standard, or because it possesses within its pages swear words or other words in which people find offense, is to completely misread such a book, and to misunderstand the point of it all – not just the book; but culture itself.

This is because culture is not standard. It should not, therefore, be contained or controlled. It is natural. It is alive. It flows and changes in various fluctuations and metamorphoses. Just as one should not attempt to limit access to or dismiss books because they contain ‘foul’ language, neither should one attempt to downgrade or delegitimise books written in perfect Standard English – because they have an equal part to play in showcasing one part of the greater whole that is ‘culture’.

And here one can see the danger in trying to standardise or control language, because: “The standard language literary form becomes ipso facto ‘the’ literature, and everything else is subservient. It’s marginalised. Writers who are using phrasing and rhythm and grammar in a different way from the standard English literary form – in other words, trying to capture language as it is used by their own community – well it’s a form of English, but it’s inferiorised. It gets pigeon-holed as, at best, vernacular literature,” as Kelman notes.

Of course, the hope when attempts at banning books or censorship occurs is that such attempts will backfire; setting those asking for such things up for ridicule, particularly from younger people. As Irvine Welsh says: “It makes [censors] seem very infantile.”

And this, it must be said, certainly seems true. How can anyone, after all, be genuinely upset by swearing – words that irrefutably exist and form a crucial element to our language. People so often don’t even swear to be abusive or to cause offense: it’s just how people talk.

Here again, Kelman is on hand to explain further: “people can use swear words to emphasise the beauty of something – so it’s not really a swear word at all. If you say something is ‘fucking beautiful’, how can it be swearing, because you’re emphasising the beauty of something. If so-called swear words should only be used when appropriate, well what do you mean, ‘when appropriate’? I was in my 20s before I even realised the word ‘fuck’ had to do with a sexual act for some people. It was never used in that way for myself, and none of my community used it in that way.”

Indeed, Willy Maley recognises the range of functions swearing can adopt in Kelman’s work, in his essay ‘Swearing Blind’. Maley writes: “The swearing is integral to Kelman’s power as a writer. It is neither a vulgar and superfluous supplement nor an offensive coating concealing shortcomings in the narrative, dialogue or characterization.”

So, when we see stories of people, organisations, parents, or – more worryingly – governments attempting to censor, ban, delegitimize and generally control the books we read and the type of culture we have access to, we might think ourselves in a position to point out that there is nothing logical about their stance. And indeed, we might suggest they are ever so slightly missing the point of it all.